This week, New York City commemorates the tenth anniversary of the NYC Smoke-Free Air Act, a landmark piece of legislation that has helped New Yorkers breathe easier and live longer. Thanks to this groundbreaking law, New Yorkers are able to breathe clean, smoke-free air in the workplace, regardless of whether they work in a high-rise office or neighborhood restaurant or bar.

The NYC Smoke-Free Air Act was built upon a continuing campaign that has protected residents from the dangers of secondhand smoke and helped drive down smoking rates in the city to record lows.

END_OF_DOCUMENT_TOKEN_TO_BE_REPLACED

On Wednesday, February 27, the Coalition was joined by over sixty community leaders, housing organizations, and public health advocates for “Smoke-Free Housing Strategies in New York City” – a workshop designed to increase awareness around secondhand smoke at home and what some organizations are doing to reduce exposure.

Specifically, two new resources were released:   Asian Americans for Equality presented on “Making Room to Breathe: A Case Study of Smoke-Free Housing in NYC” and the Community Service Society of New York (CSSNY) presented their new  Smoke Free Housing Guide for Residents of New York City.  As a non-profit housing provider with a long history of tenants advocacy work, AAFE worked with the Coalition to make two of its properties smoke-free.  Notably, the case study also addresses working within the confines of rent stabilization laws to promote healthier, smoke-free homes.

Through their community education and outreach 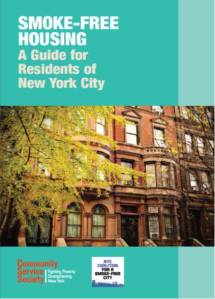 work, CSSNY recognized a gap of information and created a concise and accessible guide to smoke-free housing for multiunit housing residents.  Previously, most of the Coalition’s work around smoke-free housing involved outreach to building owners and property managers.  We were thrilled to partner with CSSNY to increase awareness of and support for smoke-free housing among residents here in New York City.

Finally, the New York Public Interest Research Group (NYPIRG) presented on community education strategies specific to the release of these two new materials.  Far too often, community organizations develop content such as reports, infographics, or videos that do not reach as broad of an audience as they could.  NYPIRG suggested that Coalition partners engage community boards, decision makers, non-profits, tenant associations, and local media to make sure these resources are widely disseminated.  They even gave a great example of how they would integrate their own messaging into an outreach strategy on college campuses: “200,000 NYC youth are exposed involuntarily to secondhand smoke at home.  That’s almost as many students there are in the entire CUNY system!”